Is there a way to either occlude rear-facing particles or fill out the figure with point cloud mass to make it a monolith semi-transparent sculpture?

Thank you for your advice. 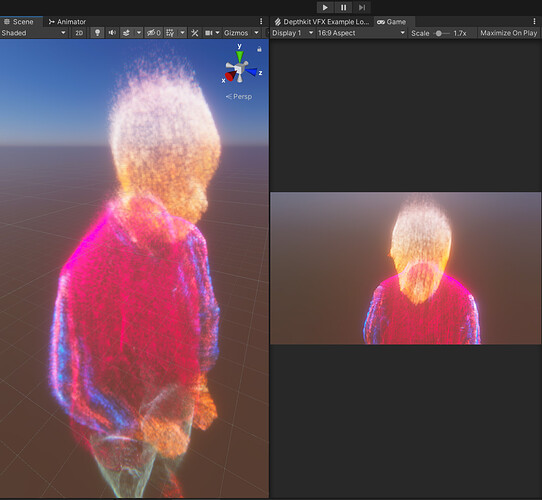 fill out the figure with point cloud mass

Hi @MartnD,
These are good points.

Lite player currently only works with built-in RP, as far as I know, thus no VFX graph is possible.

@NikitaShokhov I checked with and @James and @Tim and it sounds like you can mask the rear-facing particles by adding a mesh/solid look to your asset (can be low-density for performance), but only write to the depth buffer so that it remains invisible in the render, but mask any particles behind it. Apparently this was done using the legacy Depthkit Unity plugin and legacy Depthkit Visualize app, but has not been rebuilt using the modern packages.

Hi @CoryAllen,
Sounds promising. But how exactly to do this? I have never done it, and after some search, it’s unclear, whether it’s just Shader Graph modification or a complex programming.

Hi @CoryAllen ,
I solved the shader, the depth buffer only approach works exactly as I wanted. Thanks a lot to you, @James, and @Tim.

Glad to hear! If you are able to share how you accomplished this, I can try it myself and integrate that into our documentation.

@CoryAllen, Sure. It might be nice to include instructions about this issue.

For me, it was balancing between transparency of VFX and the shader. So we have a range of possibilities between only VFX particles visible and no mesh at all, and only mesh visible and no particles.

Now, how I accomplished the shader to be able to control its transparency and avoid seeing the character’s rear-facing mesh. If it’s Unlit shader, check these two boxes Transparent Depth Prepass in Material > Surface Options; and in Shader Graph > Graph Inspector. I also exposed Alpha property for quicker adjusting transparency.
Highlighted in orange: 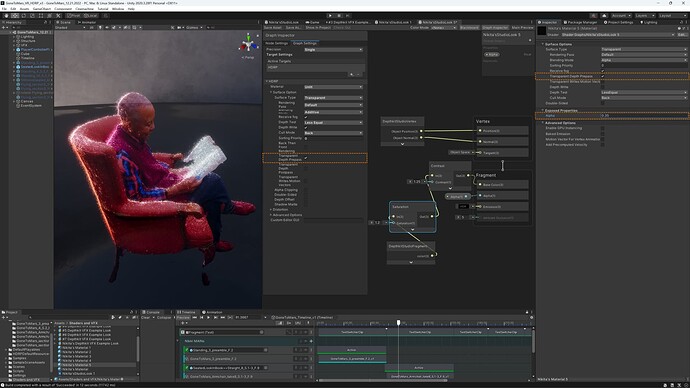 If I uncheck one of the boxes, we see through the front surface. Highlighted in red:

If I want to make the mesh completely invisible with Alpha, the character with VFX particles looks nicely full-bodied (doesn’t look as it’s empty inside):

Let me know if you’re able to repeat it and if you have questions.