I have a problem that has me scratching my head - its also making it impossible for me to use any footage I shot, so Im really hoping to find a solution.

When I open up existing Depthkit file, the 3D and RGB data is being heavily cropped by a round circle in the middle of the screen.

Im sure I captured more than this, but for some reason the data is being cropped.

The odd thing is that the color preview and RGB preview look totally fine. The data looks like its all there, but there’s this weird cropping of the image in the main part of the interface.

Also, the white ‘box’ that defines the 3D volume is shrunk down to a cube - about the same size as the circular crop.

Do you have any advice that could help me restore my footage? I really need it for the project Im working on. 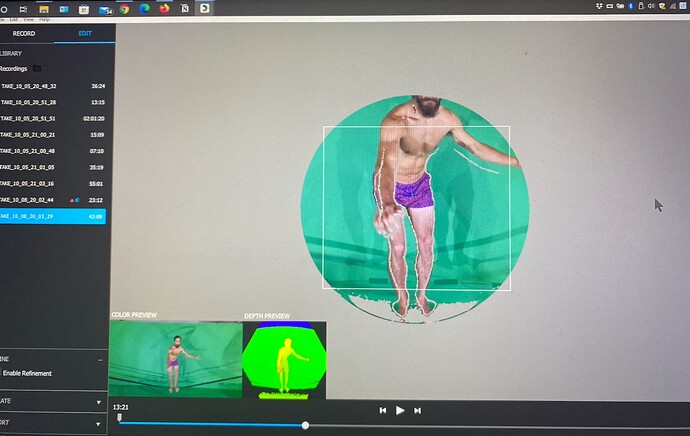 I haven’t seen this specific issue before, but I have shared it with the team here, and from what we can tell, it seems like the project has been partially corrupted, specifically with regard to the calibration data for your sensor saved in the Depthkit project JSON.

To recover this, you can try the following:

I followed your instructions, but whatever Depth Mode setting I used to create a new Json file for calibration, I always get the same values for defaultDepthSource.id and defaultColorSource.id.

Finally, I updated my DepthKit application to version 5.12 (I think I was using 5.10). Then opened up the corrupted file again - but got the same cropping problem.

Is there way I could send / attach the 2 Json files - just in case you’re able to spot something else going on? The values seem pretty consistent between them, but I’m not really sure what else to look out for.