360 captures in Unity with Depthkit

So you’ve set up your Unity scene with the environment and Depthkit clips and now you’re ready to capture some 360 equirectangular video of the scene. When capturing with Depthkit clips in the scene, you may run across a timing issue where the capture plugin and the Depthkit clips are running at different speeds. Don’t worry, we have a solution!

In short, you need to apply a script to each Depthkit clip that syncs the clip video with the capture of the 360 plugin.

Where do I get such a script?

If using VR Panorama as your capture tool, the latest version includes such a script. Make sure you are working with the latest plugin update and find the script under Assets/VRPanorama/Tools/VideoSync.cs.

Now you just need to apply this script to each Depthkit clip. 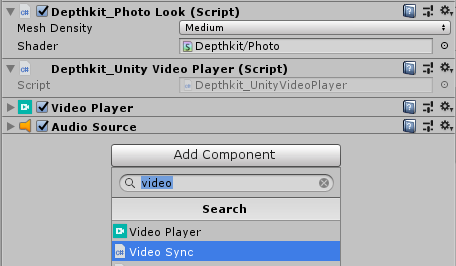 Community Question: What is your preferred Unity 360 capture plugin and why?