Using multi-sensor Studio setup, rarely one or few stands with sensors could be accidentally slightly shifted or hit after calibration in between many takes. If a filming crew notices this, it’s easy to re-calibrate and continue filming again. But if the crew wouldn’t notice the slight shift, then we get all our takes with shifted perspectives and it only becomes obvious in Unity after all post-processing done.

Is there an easy way to integrate micro controls of transform and rotation for all three axis in Advanced Per Perspective Settings section? To quickly compensate that shift for a certain sensor. Theoretically it’s easy to implement, isn’t it? Currently, Depth Bias Compensation can slightly fix this, but it’s not flexible and doesn’t help properly in my case.

I have this kind of footage with a couple of shifted sensors right now and if it’s a few lines of code to put in your Depthkit Studio Mesh Source component to implement this, it would be so helpful. Otherwise, the only way to use this footage is to switch off those sensors completely and get distortions on that side. Perhaps this feature would be useful for other teams too. 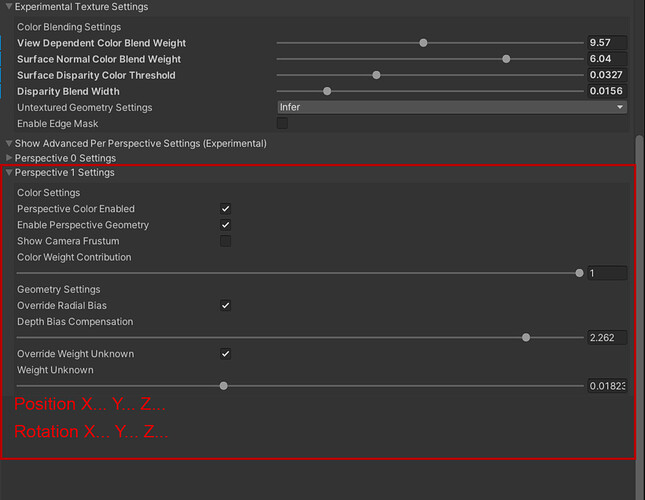 @NikitaShokhov Thanks for sharing this request. Discovering that a sensor has moved between calibration a capture and invalidated part of the calibration is a serious issue, and we have been discussing internally ways to address this.

Currently, our plan is to develop the tools to repair the calibration within a future version of the Depthkit app, so that these repairs are baked into exported assets, eliminating the need to apply any transformations in other platforms.

Until then, you’ll have to modify our Unity SDK to apply the manual transformations you describe.

@CoryAllen, thank you.
It would be ideal to have the repair tool in the Depthkit app, looking forward to it. Is there an approximate ETA for a new version that will contain this feature?

@NikitaShokhov Thanks for the +1 to this feature.
It’s unlikely we’ll add calibration repair until the second half of 2023 or later. The upcoming 0.6.1 release has some great new features for calibration and hardware configuration, but unfortunately a repair workflow didn’t make the cut.

We’re currently working on a big overhaul of our rendering in Depthkit to support much higher quality. We’re also placing high priority on our own 1st party WebXR playback system. These features are taking priority over more advanced calibration workflow improvements .